#42 and the first week back in the studio

Can we already be a week into February? Time, tide and fifth albums it seems, wait for no man…

The sudden spurt of "out of the studio" activity that the Christmas Lights release brought, subsided into an eerie silence for much of January. In the studio calendar, January had been pencilled as a month off. It will come as a surprise to absolutely nobody, that Chris was back at it less than a week into the new year. Jonny also came in to do some guitar experimentation for a while, making a wonderful mess of the Bakery with the whole toy box spread out and plugged in everywhere you looked. 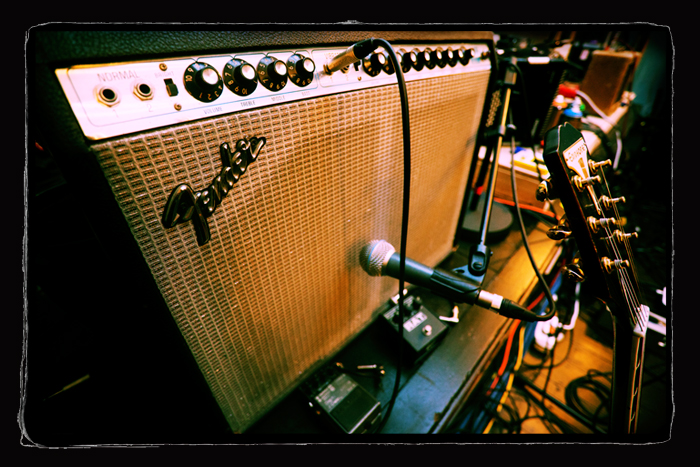 Despite now having two buildings, both Bakery and Beehive were positively bursting at the seams by Christmas. Every room had some kind of writing or recording setup on the go – you even had to time your use of the kettle carefully, as a laptop and speakers had been set up in the kitchen and Jonny was in there working on his epic lead for MTM. So, by comparison, the first few weeks of the year felt like a ghost town.

Suddenly though, the return of the full band was imminent and the vibe became more akin to that of a town preparing for an approaching storm. Folks were running about battening down the hatches with extra microphone cables. Drums were being tuned, headphones checked and mics "one two"-ed. Add to the approaching band the fact that Brian was to be in for a week and there was very much a sense that pretty much anything could happen. 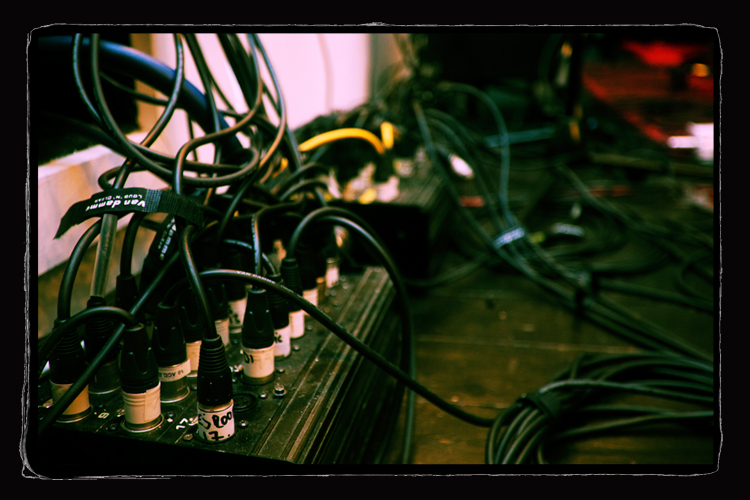 It’s a strange thing to witness, when the band are working with Brian. Just his presence affects the way that they play. And even more than that, it affects the way that the band listen. For starters, the volume goes way down, which you would expect to take all of the excitement out of things. It very definitely has the opposite effect, though. Suddenly, every tiny sound, every nuance in the timing of the notes becomes audible and begins to burst with possibilities. It’s a little as though he encourages everyone’s antennae to open up higher and wider. 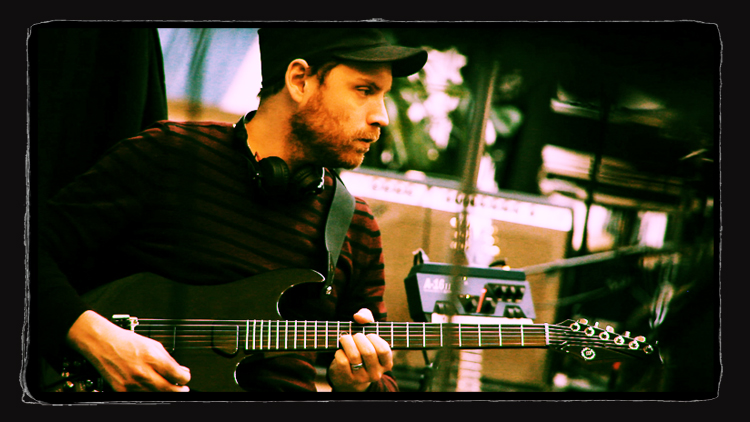 Brian also treads a careful line between being almost allergic in his opposition to the obvious ("Well, it’s in three four time, so the natural thing is to try to put the emphasis on this beat and that one – we should do a run through without being allowed to even play there") and, on the other hand, supporting simplicity ("It’s absolutely beautiful as it is and we shouldn’t be afraid of just having a beautiful song"). I guess it all boils down to exploration. 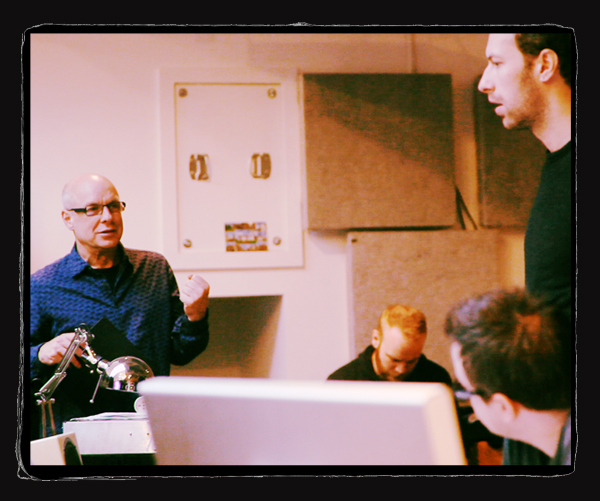 Chris suggests playing the aforementioned gorgeous melody as though they are a metal band. The first stab at this is predictably (and intentionally) comedic. They pursue it though, playing one section over and over in a loop, varying the dynamic from pin drop quiet to aggressive and bolshy. They move through the transitions as one unit, as though someone is pressing their foot smoothly on some huge gas pedal somewhere.

Often, when talking about working in studios, people say "God, I couldn’t stand it, listening to people playing the same bit of music over and over and over again all day". In reality, when you’re amongst it and privy to the "Why don’t we try..?" conversations, it becomes nothing like that. The best way I can describe it, is to compare it to one of those montage sequences in an eighties movie where the main character is taken clothes shopping. In the montage, you’d see the star emerging time after time from the changing room in radically different outfits, pulling faces, striking poses. Here of course, the song is the star and the outfit is the arrangement, the sound, the instrumentation. The song will eventually emerge with a stunning and perfectly stylish outfit that will define it forever. 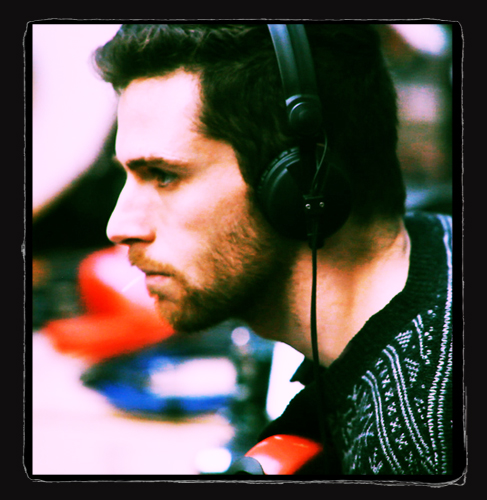 They’re also joined for an afternoon by Mr Tim Wheeler from Ash. He straps on a guitar and jumps into the day’s tune. The raised antennae pretty quickly catch a signal. He’s fiddling around at the top of the neck, looking for melodies, just throwing out streams of notes. Chris starts to call over the mic "What was that?". He sings a tiny snippet of something that Tim played only once – almost as something to just get his fingers moving. It’s such a tiny cluster of notes that for a while it’s unclear where they should fall in the chord sequence until finally they drop into place and twinkle like they’ve been there all along, just waiting to be discovered. 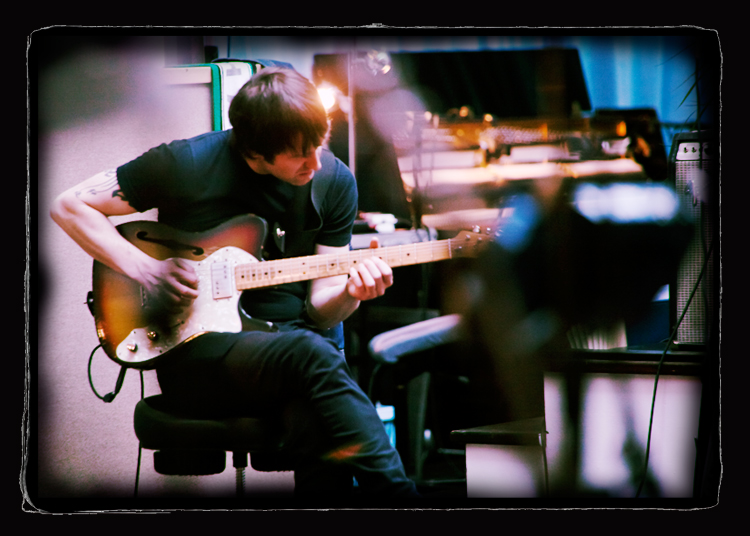 All of these gems of course, don’t come without trying on a lot of very ill-fitting and unsuitable outfits first. In a rather lovely role reversal, Brian becomes artist and Chris the producer. After some considerable time experimenting with right hand rhythms on his acoustic guitar, Brian has successfully avoided the obvious, whilst not quite landing on anything desirable to replace it. Chris sits listening and allows Brian time to try a few things out before finally pondering, "I’m not sure this is going anywhere – how about trying that chaotic birdcall generator you had? That might be perfect here…." Brian actually seems to revel in being given direction from the artist he’s supposedly producing. And for the record, the chaotic birdcall generator was indeed just the ticket.

By the end of the week, the antennae are expanded to their full and highly tuned. Guy fiddles around with an acoustic instrument called the "inspiration". It’s part banjo and part mandolin. He’s playing it in a most peculiar way though, through his bass rig and foot pedals. The sound kicks off a jam that levitates the room by several feet. It’s almost symphonic, despite being almost entirely played by abusing regular rock instruments. It’s come from nowhere, yet will doubtless become a major part of the track in question from this point forwards. 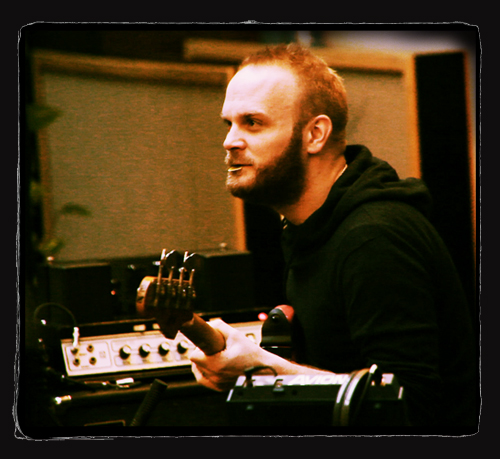 Markus, meanwhile, is almost like a personal trainer. Every day, he is putting the songs through their paces – getting them into peak condition. He makes them sweat and often has to play the bad guy – but they end up without an ounce of fat and enough muscle to take on the world. These specimens then get shown a thing or two about heading out into the world with the Eno sense of style. The band of course, are in the song’s very genes. They’ve given birth to them, nurtured and encouraged them – they are their very own flesh and blood. They just look to their collaborators to help them become their best selves. 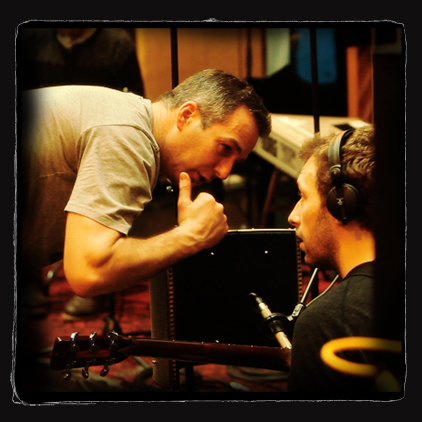 Brian says his goodbyes and heads off into the Friday evening, leaving a set of songs very well dressed and looking a good deal sharper than when he arrived. Almost as soon as he’s left the room, there’s an almightily silly jam session to conclude the week. Exactly the kind that every single band in the world has when they’re just goofing off. There’s ridiculous jazz, there are heavy metal riffs played in a funk style and there are beaming faces all round. It’s a huge release – almost as though in the days being in a heightened state, everyone had forgotten to exhale.

So that’s the first official week back of the year. Judging by what they got done, 2011 is shaping up rather well…