Mylo Xyloto comic – the story behind the album revealed!

hello everyone
3 years ago we had an idea with our friend mark osborne about a character called mylo xyloto ("xylo" as in xylophone, "to" as in toe).
gradually mylo’s story and universe came together and this ended up providing the backdrop for the album and tour.
now we’re proud to announce that early next year the story’s going to come out as a 6-part comic.
and to kick things off mark’s going to be holding a panel at comic con in san diego this week.
so if you’re there you can ask him ‘who’s major minus?’ and ‘what the hell’s the hypnofeed all about?’
we hope you like it. it was fun making it.
love coldplay

The first issue of Mylo Xyloto (published by Matt Groening’s celebrated Bongo Comics) will be available, with an exclusive variant cover, at the 2012 San Diego Comic-Con International (12-15 July) at the San Diego Convention Center. On Friday, 13 July, the production team behind the comic will appear at a panel to discuss the series and afterwards will be available for autographs in the official signing area. A limited supply of the exclusive edition of issue one will also be made available via the Coldplay.com Shop.

The six-part comic will then be released monthly from February 2013. The series will be available to pre-order via the Coldplay.com Shop soon. 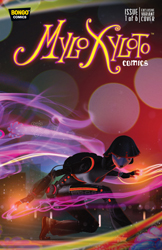 WIN A COPY OF THE VARIANT COVER ISSUE ONE OF MYLO XYLOTO!
Enter your info below before 9am BST on Tuesday, 24 July. Five randomly-chosen winners will each receive a comic.